Dunno what you guys are all doing, but here are some cool ideas! Esp. the last one if you are near good fireworks!!

http://www.instructables.com/id/Photographing-Fireworks/step2/Camera-Setup/
Posted by Jasmine at 2:44 AM No comments:

Thought I'd show you a lil somethin somethin ;)  No more pink rexy! 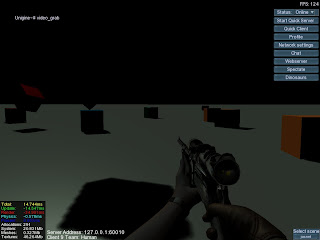 Today I have made great progress! As it is, you can spectate or join the game. If you join the game as a human, you actually are a pink t-rex. If you join as a dino, you are a normal looking raptor. So I am now in the process of melding into netPlayer a first person view capability so that the human can actually be a ..err.. human.

Then I am going to hook up the controls and movement for the players so that that is shared through the network as well as everything else. As it is it's only local, as I ripped out the code when I was having some issues from before. I am going to build it better this time, but it's already rather fun as when you spawn as a dinosaur, the camera is behind you, so actually feel like you are running around in a real game! 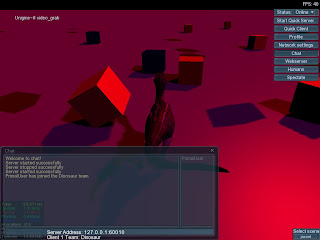 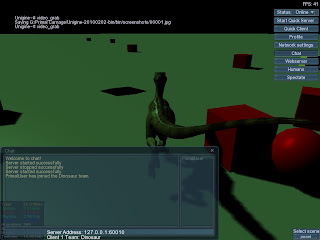 Posted by Jasmine at 2:40 AM No comments: 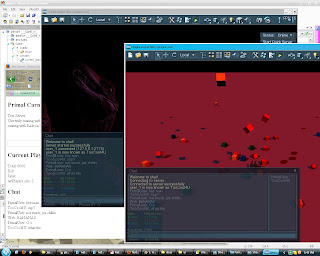 Posted by Jasmine at 4:44 PM No comments:

Well, unfortunately I won't be doing much more work on at least one of my recent songs as after a little bit of work it seems to jig Live into only my right audio channel and if I barely touch the set Live just crashes and I have to wait a while so I can restart it. Soo, I am typing this. Networking is coming along great! I do wish it was coming along faster, but who doesn't. As well, it actually has come quite fast, because I got it all working manually already! But, I trashed that after getting an awesome response from the Unigine crew shedding a little more light on their networking system.

Long story short is that I was essentially going to be recreating some parts of what they've already done, so I decided it would be best to use theirs - after all, it will be the most likely candidate if there are somehow any engine-side speedups that can be taken advantage of (in the e-mail they mentioned increasing performance with networking) anyway. So, things have hit a few hitches. Nothing major really, just silly minor bugs - the kind that any really serious project requires attention to. Such as states being shared by the server somehow mismatching the server's actual memory, so that while even ON the server there are the right amount of players, anyone who joins gets anyone who hasn't joined. Most likely I have either missed a command, or something else, perhaps an assert or if-return is running before the right destruction procedure. So far though, the logs on both server and client's consoles read a-ok. It's possible it is a Unigine side problem, but this already spans a good 13-15 files already and it really could be split into more so I am not ruling out that it's my error somewhere. Looks like Live has stopped so I'm gonna play around with some music for a bit and get back to coding. :)
Posted by Jasmine at 12:45 AM No comments: 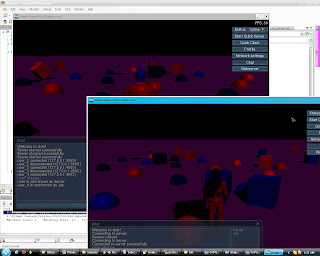 Whooooo!
Posted by Jasmine at 4:24 AM No comments:

Just wrapped my head around how we are likely to be doing networking in Uningine. Still lots to ponder, will report back here - gonna let my brain rest for a bit hehe :D
Posted by Jasmine at 1:35 AM No comments:

Hooray! Got pathing functioning. Currently it just uses linear interpolation but we needed it without having to use the standard Uniengine pipeline of using 3ds Max. We are doing it so that we can place out nodes, or trace camera movement, in-engine, then replay that behavior on command. My code is in my personal testbed, as is Michael's in his, so tomorrow (read: later today) we are going to merge them.

Hopefully a pretty video will result once we have all this done. Also will be able to be used for cinematics, object motion, and many other such things!

(edit)
Welp, it's now 6 AM and I have stayed up FAAARRR too long!  BUT!  I created a server statistic/management page and successfully have communications from game to web and from web to game! Victory! Great success! *passes out* 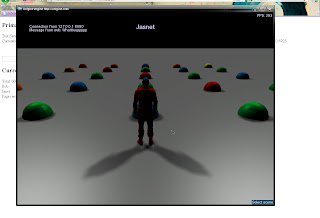 Today I got console variables working in Uniengine. These will hopefully be quite useful, especially later on once we get game modes in and going for all the tiny mechanical tweaks.
Posted by Jasmine at 12:10 AM No comments:

Long story short, I had to reinstall Windows clean. It will be for the better so all is well, but bear with me as I fall back into step!
Posted by Jasmine at 8:37 PM No comments: